You searched for 'Immersion'

What is baptism? What does it symbolize? Can I be saved without being baptized? Are professing believers alone to be baptized? What about infant baptism? What is the baptismal formula? How is baptism to be performed? Is it by sprinkling, pouring or Immersion?

Let me start with a personal testimony. I was born in Iraq to an Armenian (not Arminian) family. The church of the Armenian people is the Armenian Apostolic Church, which is an Orthodox church and it is very much similar to Roman Catholicism. Infants would be baptized around 40 days old or something around that time. That was not different in my case. Throughout my youth, I saw my infant baptism as the basis that I was a Christian. What made it also difficult was the fact that in Iraq, everyone would have their religion on their ID card. I even served as an altar boy in the church when I was little. But to be honest, I did not know the Gospel, yet I was not ashamed to proclaim that I am Christian, but don't ask me what the Gospel is! Thus, throughout my youth, I saw my baptism as the ground that I am a Christian, even though I did not pray often or did not know why Christ died. The Armenian Church, by the way, believes in baptismal regeneration and baptism by dipping the infant thrice in a bowl of holy water. My family came to the Netherlands in 2008 and I finally knew what freedom was, but not the freedom of the Gospel (yet). Two years or so after that, I met with an old friend and stayed with him a few days. He saw that I did not pray before bed, so he questioned me. He told me about prayer and how proper is it to pray to God and thank Him for everything. I told him that I don't want to be religious. He directed me to videos and episodes of Zakaria Botros (Arabic), who shares the Gospel with Muslims via TV and exposes Islam. Through his videos and episodes, I came to know the true Gospel and was saved by God's grace. After that, there grew in me a desire to study His Word, so I bought Bibles and study Bibles and started reading the Scriptures daily. Around that time, I started attending a Baptist church. I did not know that it was a Baptist church. We went there with some friends of mine and by God's grace, kept attending church on the Lord's Day.

I started reading the Bible and I could not find anything about the baptism of infants or that baptism as the basis of my faith and all the things which I had simply assumed in my youth. So I set out to study this matter and came to the conclusion that infant baptism was unscriptural and what happened to me as an infant, was not biblical baptism. On a Saturday night, I fell on my knees and asked the Lord if He wanted me to be baptized that He would give me some sign. The next day, the Lord's Day, the preacher talked about discipleship and following Christ no matter what and he said something like, “It doesn't matter what your family will think of you if you want to be baptized”, which I saw as a sign from heaven. My family would not have been happy about my baptism because they think that my baptism as an infant was valid. Moreover, the Armenian Church is a national church. It does not get new converts, for example. Most infants are baptized and declared Christian, even if they know not the Gospel. Therefore, the only baptism that is practiced and that I have heard of is infant baptism.

We’ve already taken issue with the idea of multiple administrations of the Covenant of Grace and tried to point out that the Abrahamic Covenant or any other covenant in the Old Testament is not an administration of the Covenant of Grace or is the Covenant of Grace, but they contain the promise of the Covenant of Grace. But now, let us get back to our text (v. 12). This verse shows us our union with our Lord and what baptism actually symbolizes. Baptism, the going into the water by Immersion, perfectly symbolizes the believer's going into the grave with the Lord Jesus, dying to self and burying the old man and putting off the body of flesh. But coming out of the water, symbolizes our spiritual resurrection with our Lord, that through Him we overcame death and sin and reign in life with and through Him. Such an intimate union that is connected with baptism cannot possibly be experienced or realized by an infant! This text is similar to that found in Romans 6, which points out an implication of the fact that we have been baptized:

Rom. 6:3-4 Do you not know that all of us who have been baptized into Christ Jesus were baptized into his death? 4 We were buried therefore with him by baptism into death, in order that, just as Christ was raised from the dead by the glory of the Father, we too might walk in newness of life.

Conclusion On The Abrahamic Covenant

We have seen that the Abrahamic Covenant is one of the central covenants in Scriptures with a lot of difficulties and interesting stuff accompanying it. I have tried to argue that it cannot be the Covenant of Grace or an administration thereof, but it is a gracious covenant nonetheless. It was dependent on the obedience of the people and closely connected with the Mosaic Covenant and obedience to it. This was a covenant which could be broken simply by rejecting circumcision which was the sign of the covenant. It was Christ along with everyone in Him to Whom the promises were made and they are ultimately realized in Him and those who are in Him.

I direct the interested reader to the works of Jeffrey D. Johnson: The Kingdom of God and The Fatal Flaw (see my review). 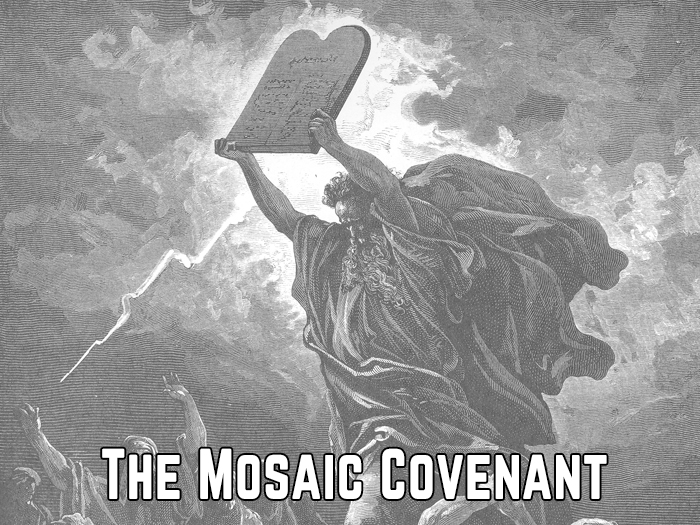 The next revelation of the Covenant of Grace in God’s plan was through the Mosaic Covenant with the children of Israel. This is the central covenant in the Old Testament Scriptures. There will be a lot of things that we’ll need to get into concerning the Mosaic Covenant.

After the Lord God Omnipotent made a covenant with Abraham, which He also repeated and promised to Isaac and Jacob, He sent the children of Jacob to Egypt. The first to be sent was Jacob’s favorite son by the wicked act of his brothers. Starvation drives the brothers to Egypt where they find out that their brother has become the second most powerful man in the world after the Pharaoh himself. Not only do they find that, but also the fact that ...